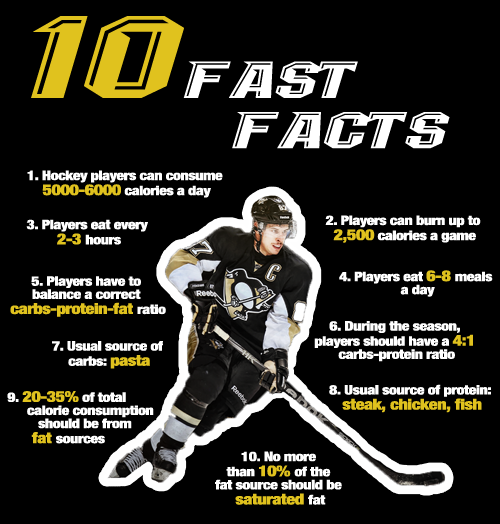 There is sometimes a misconception in hockey fandom that "eating healthy" means eating a lot of salads and avoiding carbs, or eating healthy in the way a normal person would, by restricting their carb and fat intake. But for hockey players this is not so. In fact, eating can be a full-time job.

Hockey requires a ton of energy, with players burning as much as 1,800 to 2,500 calories per game. This is why excess body fat usually isn't an issue for most players, and why it's extremely important to eat right, and to eat a lot and often. Hockey players burn so many calories that it's a struggle just to keep weight on. The players' diet has to fuel them through games, plus on-ice and off-ice workouts, for an 82-game season. The amount and kind of food they eat help them sustain their explosive power and speed on the ice, and helps maintain their weight and muscles over a six-month stretch (8 ½ if we count from training camp to the Stanley Cup final).

The diet will vary from player to player, because they have different needs and target goals, but hockey players can consume as much as 5,500 to 6,000 calories a day. It's important that the players spread the calories over a balanced diet of carbs, protein and fat. To this end, they need to know how the different food sources will affect their bodies and their on-ice performance.

To help the players get enough calories during the season, the team has daily breakfasts and post-practice lunches as well as pregame and postgame meals on the road. Before games, it's recommended that players eat slow-burning complex carbs, such as oatmeal, brown rice, corn, peas, root vegetables, beans, lentils, yams, and pasta. After games they should be eating fast-burning simple carbs, such as biscuits, raisins, honey, sports drinks, and fruit juices.

“Simple carbohydrates are supposed to be ‘bad’ carbohydrates, but they’re quick absorbing, so for an athlete, it’s not necessarily bad right after a game.” – Jesse Demers

During the season, hockey players need a 4:1 carbohydrate-to-protein ratio to minimize muscle breakdown; players who play more minutes also need to consume more total calories. On average, each minute of ice time requires a little less than 100 kcal, but players who are more active on the ice—whether from hitting more, skating more, or both—can burn more than that. Players who log 20-25 minutes per night can easily burn the same number of calories in a game that an average person would need to get through an entire day. Players with this kind of ice time may need 50g of carbs and 15g of protein after a game for muscle maintenance and recovery, while a player who plays four or five minutes per game may only need 25g of carbs and 5g of protein.[1]

Protein is one of the body's building blocks, and helps serve as fuel. After periods of intense activity, it's important to replenish the protein stores. Protein also helps repair the damage of repeated muscle-ware. Usual protein sources for hockey players are steak, chicken, and fish.

To help reach 6000 calories, players will include fat in their diet, but be careful not too eat too much of the saturated kind. Instead they consume things like guacamole and whole fat milks. The good fats. Ca. 20-35% of daily calories should come from fat sources, though no more than 10% of this should be saturated fat.

The amount of water and electrolytes a player loses during activity depends on his size, metabolism, and conditioning level. Proper hydration is crucial not only to prevent cramping but also to maintain muscle. Players should be hydrating before, during, and after practice, as well as at home.

Players who are likely to play a lot of minutes should also drink a couple of carbohydrate drinks throughout the game or eat a little bit between periods, even if it’s just a couple of bites of an energy bar. Doing so can help maintain blood sugar levels and prevent a third-period crash.[2]

With their busy schedules and high level of activity, it's important that players maintain their weight by eating the right foods at the right time, as well as the right amount of food.

During an especially busy stretch—for instance 4-5 games in 8 days—players might dip below the weight they're trying to maintain and will need a couple of days to work back up to it.

In the preseason, a player's weight is measured before and after practice. During the season the training staff weighs them ca. twice per week to check for discrepancies. Players are usually not weighed on game days, because potential discrepancies can be such a disruption to their game-day routines.

Here's an example of what a player can eat on a normal game day:

This might seem like a lot of food, but is absolutely necessary to help players replace what they lose in games and practices.

To reach peak performance, players need to find their optimum weight. Anything below this can mean their energy levels dropping off. If a player drops too low beneath their optimum weight, it can weaken their immune system, and players will get sick, picking up colds easier.[3]

Early in the off-season, it's recommended that players keep a 2:1 carbs-to-protein ratio. As the summer goes along and the workouts become more intense, the ratio needs to be closer to 1:1 to provide extra protein for muscle growth and repair. It's important that the players don't get too focused on proteins and avoid the carbs they need, though. During the summer, players should eat whole unprocessed foods that help them meet their daily caloric and nutrient requirements. In addition to performance benefits, whole foods help promote long-term health. Carbs should be the main focus of the meals, with proteins and fats assuming a lesser role.[4]

The challenge of the off-season is cutting back on the calorie consumption from the regular season. A lot of players find this difficult, and is one reason the weight of high-performance athletes often shoot up when they stop playing. This is because they're simply not expending the same amount of energy as they are during the season.

Retrieved from "https://penguins-primer.fandom.com/wiki/Food_and_Hockey_Players?oldid=3316"
Community content is available under CC-BY-SA unless otherwise noted.